If you don't know what something is, it's more difficult to see it, however hard you look. The eye/brain works with a vast library and interpretative system that constantly checks and compares.  When it sees clouds, the references tend to be as background, as a low processing priority. Effectively, our default mode for seeing clouds is as a static, 2-dimensional backdrop.

Travelling on motorways and in trains, I began to notice that the smooth, rapid movement of my viewing position was giving a clearer view of the dimensions of the clouds. The eye brain begins to receive new motion parallax information, changing the nature of the optic flow, and allowing the library to swing into action and deliver a picture of a 3-dimensional object.

Watch in HD if you can. 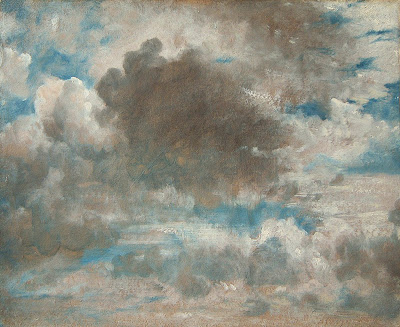 First, there was a lifelong-fascination with a particular painting, a cloud study in oil painted by Constable on August 1st 1822. Later, I began to photograph clouds. Somewhere in the middle I'd got hold of the text book on seeing, Vision Science by Stephen E. Palmer.

The dominant concept which emerges time and again throughout this fascinating book is that what we think of as what we see is not what is projected onto the retina. We enhance that primary image massively in the brain. It is the eye-brain complex that sees, not just the eye. Different areas of the brain are hard-wired to the seeing process and introduce assumptions about what we're looking at into that process, based on texture, shading, colour, movement, size, edges and many more specific clues. Sometimes, those assumptions can be wrong; that's what optical illusions are all about. 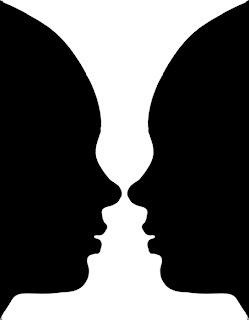 Once you've seen what's going on, it's easy to swap between seeing the goblet and seeing the faces. You're turning a switch in your brain which is normally hidden, part of an instantaneous, unconscious process.

Back in cloud-land, I was now looking at the skies with a new interest. There was an element to their being that I was finding impossible to pin down in my pictures. I'd been through many question and answer sessions, such as the debate over whether to include any land in the image. That was easily answered by re-visiting Constable, whose studies of clouds alone directly inform subsequent landscapes, in their inclusion and their effect on the landscape's lighting. 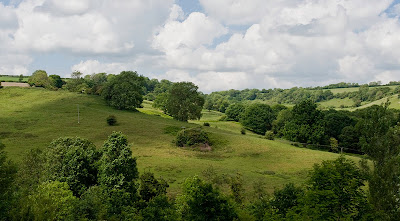 The photographer captures a moment. The painter has time to juxtapose the light-source of the clouds and its effect on the landscape - he can create what a photographer would have to call a composite.  Constable's small studies, done in the open air, from life, could only take ten minutes to do - the subject was gone after that. It was this skill and the understanding of what momentary things clouds are and what moments they create that contributed to making his bigger paintings so extraordinary.

One question still stood out: how to show the dimensionality of the clouds? They are grossly three-dimensional objects, as any time-lapse video will begin to show.

But even here, it's difficult to distinguish the real distance between them all, the size of them, even the height above ground.
NEXT:
The solution that is no solution.
Posted by BOF at 13:29 No comments: